31 Days of Frights: Politicians Frighten You For Votes

In keeping with the theme of today, it is after all Presidential Debate #1 day, I wanted to round up a bunch of Halloween-esque political ads and I think I found some good ones.
1. Who can forget the Demon Sheep advertisement. It was totally funny and frightening. I loved the red glowing eyes and the video ended up being talked about for weeks.  The ad went viral and helped Carly Fiorina clinch the Republican Primary from opponents Tom Campbell and Chuck DeVore.

2. In a way that must have been hellish for Ms. Fiorina, the California Democratic Party made a parody ad against her for the general election. I’m not sure the ad had anything to do with it, but I’d like to think that it did, for the sake of horror fans all over, have something to do with her not winning her election bid against California Senator Barbara Boxer.

3. The final video I found, also from California, was the Night of the Living Pelosi ad by John Dennis, who is running against Pelosi for her congress seat. This one is absolute perfection and if I were a citizen of Pelosi’s district I’d cast my vote for John Dennis based on this ad alone. it’s too funny and too hilarious, tho the issues he presents are serious.

You’ve got about 1 hour to get ready to watch the Presidential Debates and while I do have a person that I’m rooting for, I want to say that I don’t care whom you vote for in 2012 as long as you are an informed voter, so go out there and watch the debates and really think about what principles you want to vote for.

Every October, I get into the spirit of the devilishly delightful holiday by watching copious amounts of Halloween programing and this year will be no different. There are so many shows out there this year for us Halloweenites to watch.

This year the Travel Channel will have a very spectacular lineup of shows. They actually started their Halloween programing during September and tonight they continue their head start on October with the season premiere of Making Monsters. Making Monsters chronicles the work of Ed Edmunds and his company, Distortions Unlimited as they make some of the most innovative animatronics and masks in the industry. The channel will present two back-to-back episodes weekly on Sundays starting at 8pm, so get that DVR ready. 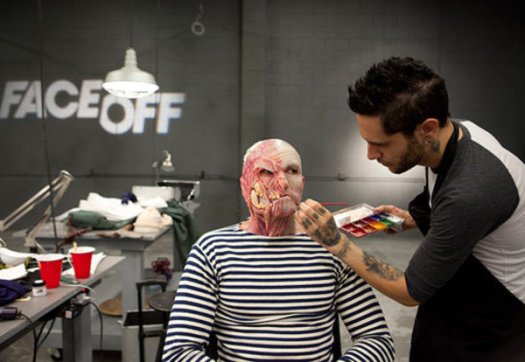 Change Your Face for a Change of Pace

On Monday, October 1, Sci-Fi (or Syfy if you must) starts its own 31 Days of Halloween event. It starts with the Midseason finale of Warehouse 13 at 9pm, which I admit I have never seen. On Tuesday, Face-Off, a reality TV makeup artist challenge, starts at 9pm followed by the extreme design challenge series Hot-Set at 10pm from executive Producers Michael Agbabian, Dwight Smith, and Aliyah Silverstein, who are also responsible for Face-Off. They round out the week with Ghost Hunters, Paranormal Witness, Haven, Queen of the Damned and Primal.

Never to be outdone, the Disney Channel and Disney Junior are holding October Halloween Events. They are calling their event Monstober over at DisneyChannel.com. Starting on October 1, there will be hours of excellent programing. They will screen Mostly Ghostly: Who Let the Ghosts out on Monday at 8:30pm. There is a My Babysitter is a Vampire marathon on Thursday, October 4, 2012. The Halloween themed season premiere of Austin and Ally on Sunday, October 7 follows the great lineup that started the week. Later in the month they’ll be premiering Girl vs. Monster. Over on Disney Junior they will have Boo for You Fridays with Halloween themed episodes and movies every Friday on Disney Jr.

Every day at 6pm from Monday October 1 to Thursday October 4th, Hub, in it’s Haunted Hub Halloween event and contest, will play a creepy episode of one of R.L. Stein’s Haunting Hour or Goosebumps.  Over at FEARnet, which is Halloween central, Will play a 2 hour block of Tales from the Crypt, every Friday during October starting on Friday, October 5 at 10 pm.

All times are Eastern and you should check with TV guide, Zap2it, or Titan TV to see your local times and channel listings.

There will be more frightening programming to come next week, so I bid you, Happy Hauntings until next time.

This is the third Friday the 13th, or July 13, 2012. It is the Third and last Friday the 13th for this year, the next one won’t be until September 2013, which seems spooky and very cursed to me. The origin of Friday the 13th being unlucky is not solidified; however, due to Norse Myth, The Canterbury Tales and The Last Supper it has become an unlucky day.

and on a Friday fell all this misfortune
-Canterbury Tales

Due to that, There are a number of interesting movies and clips that capitalize on this superstition.

It is pouring with rain at one minute to midnight on Friday the thirteenth, and the driver of a London bus is peering through his blurred windscreen as his vehicle sails down an empty road. Suddenly, lightning strikes, and a vast crane above topples into the path of the oncoming bus… Then Big Ben begins to wind backwards. Time recedes. And we discover the lives of all the passengers and the events that brought them to that late-night bus journey, from the con-man with a hundred-pound cheque to the businessman’s distraught and elderly wife. Time flows on, inevitably, to the crash — and past it, as some live and some die.

It seems interesting enough and has 6 stars on the Internet Movie Database.You can watch the entire episode on YouTube. If you drop me a line on the Facebook page and you have an Xbox360 I wouldn’t  be adverse to watching it in an XboxLive Party.

The film is a classic and eventually spawned a whole host of sequels with Jason Voorhees seeing more sites and living longer than he could ever have done if those kids had watched him, so maybe they did him a favor.

Here are some clips from the franchise of Jason killing everyone (Warning it’s a bit violent):

Following the success of the Jason movies, Frank Mancuso, Jr renamed his television show Friday the 13th: The Series from the Thirteenth Hour, to capitalize on the success of the movies. However, the series had nothing to do with Jason. As a child watching the show, I did; however, wonder when they would get to the episode with Jason but it never came. Although, later the author of the Camp Crystal Lake  series, Eric Morse, did write a book to bring the series and the Jason films into one continuity.

As a child, that theme song haunted me, I watched every new episode and the reruns, and I am, occasionally, able to catch it on the Chiller television network. Don’t forget to check out a clip or two on YouTube.

I never was able to watch this installment and will undoubtedly do just that tonight. I had heard that it was panned universally and only received a 25% rating on Rotten Tomatoes.

It has a different origin story, so that might be interesting having heard the story about him having drowned all those years ago ad nauseam.

Now, sexy Dean, from the Gilmore Girls is in it, so that is a bonus of sorts. 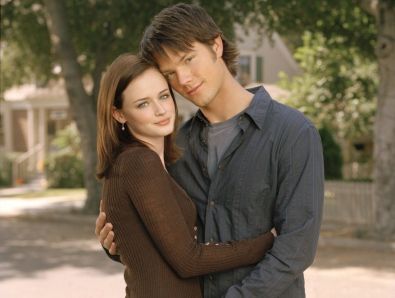 And if it isn’t haunting enough for you to know that I watched every single episode of the Gilmore girls, here’s some random pictures of Jason.

Freddy and Jason go out to eat

Now go out there and do something scary.

The Simpson’s – Treehouse of Horror

Did you get a chance to watch this years Simpson’s Treehouse of Horror? Check out the preview below, the full episode should be up on Hulu soon.

I love The Simpson’s and I love Halloween. Ever since I was a kid, I’ve been watching these episodes. I don’t know if that makes me old or young, I’ll leave it up to you to decide for me.

These episodes have lately signaled the end of the Halloween season for me, but I usually try to hang on a little bit more.

This is my favorite scene from any of them.