Harry died in a car accident on April 5th, one year ago to the day. He had died on his way home from the florist. April 5th was also his and Mandy’s anniversary and they had for the nearly 15 years of their marriage gone out to dinner and dancing in the city. Even when she was 7 months pregnant with their daughter who was now 15 years old they had danced the night away somewhere on their anniversary.

Today would make 16 years had Harry not died in that car accident. Had some guy on a cellphone not been too busy talking to someone about something unimportant he would have seen the stop sign and never t-boned Harry as his car crossed the intersection legally.

Mandy had sat in her favourite chair waiting for her husband to come home. He had first been just minutes late and she was peeved sighing while she looked at her watch and thought of how they’d have to rush to the city only to get caught in rush hour traffic and be late for the club. Then it became hours. She knew then that she’d have to cancel the reservations to the restaurant that they had reserved months in advance because it was always busy.

Finally, she heard a knock at the door. She wondered to herself, “why would harry knock.” But as she made her way to the front door she saw why. The red and blue lights shone into her home and she knew it was the police. Her town of Claremont was still small like that, the police would notify you if something happened themselves. They wouldn’t make a phone call, they’d just come to the house and tell you face to face. She tried to keep composure.

“Maybe it isn’t that bad. Maybe harry just was arrested for being drunk,” She repeated that to herself over and over. Not caring that Harry never drank more than two beers in a day, nor ever even drank if he thought he was going to drive the car in the next 5 hours. He was a stickler for rules and made sure that there would never be the chance that he would drink and drive. But when she opened those doors all hopes of harry having been arrested were over.

It took her a long time to really feel that Harry was gone. But even then she kept telling her daughter, Ann that it was hard to do, after all, Harry and Mandy had met in High School and had dated from Sophomore year in high school all the way through college. They had married during their last spring break of university using the time off for their honeymoon and then returning to finish out the semester in their separate dorms and finally for graduation they moved into the home that they would raise their children in.

She had spent the last 22 years with Harry, and aside from their times as youths in high school, they hadn’t spent one whole day away from each other. But now Harry was dead and Mandy had to cope with that. So she went about her days, finding things to fill her mornings and afternoons with and crying herself to sleep every night as she held his nightshirt to her face.

It was on that day April 5th a year from Harry’s death that she received a call. She wasn’t going to answer but it kept on ringing. The answering machine never picked up.

“Hello,” she said her voice breaking. “Who is this?” “Mandy Candy,” a static distorted voice said from over the line. “Who is this?” she said raising her voice. “It’s me,” the voice said. “You stop this right now. It isn’t right to play tricks on widows. you ought not to play jokes on women on their anniversary.” “Mandy Candy, It’s me Harry. I’m coming to pick you up stay looking for me by the window and I’ll be there for you.” the line went dead.

Mandy stood there listening to the beeping of the phone until Ann walked into the kitchen.

“Hey mom, what are you doing?”

“I have to get ready. Your fathers coming to pick me up.”

“You’ll not talk about your father that way,” Mandy scolded raising her voice in anger at her daughter.

“He’s dead mom, He’s been dead for a who–” Mandy’s hand slapped Ann’s face hard. Ann’s face was read like a whore with too much rouge and as she ran out of the room holding her cheek Ann’s eyes began to water.

Mandy ran to her room, quickly dressing and fixing her hair for her date with Harry. And quickly returned to the living room to sit by the window and watch for him to come home in his car.

She waited until she heard nothing.

The Headless Horseman automatically is a part of Halloween simply because of the Jack-o-lantern he palms. He is a frightening figure who rides a horse and also carries a sword, ready to spread his headless affliction. Considering the fact that he can hold a large pumpkin in one hand and can throw it, he must be a very large figure, which also can be menacing. I remember watching the Disney adaption many years ago and even though the movie was animated, Disney did not pull any punches. It was as scary as any live-action movie.

One thing about the Headless Horseman always bothered me: how is he able to see without eyes? Can he see through the jack-o-lantern? The horse? Does he have an invisible head? If so, is he really headless? I guess it is meant to be a mystery.

Guest post by Berdo, writer of  Berdo’s Retrospecting Day Parade. Follow him on Pinterest here and his facebook page here for more of his witty blog comments. He’s also a runner but you’ll have to ask him about that.

And don’t forget to

to see more frighteningly awesome pins before they are posted here. 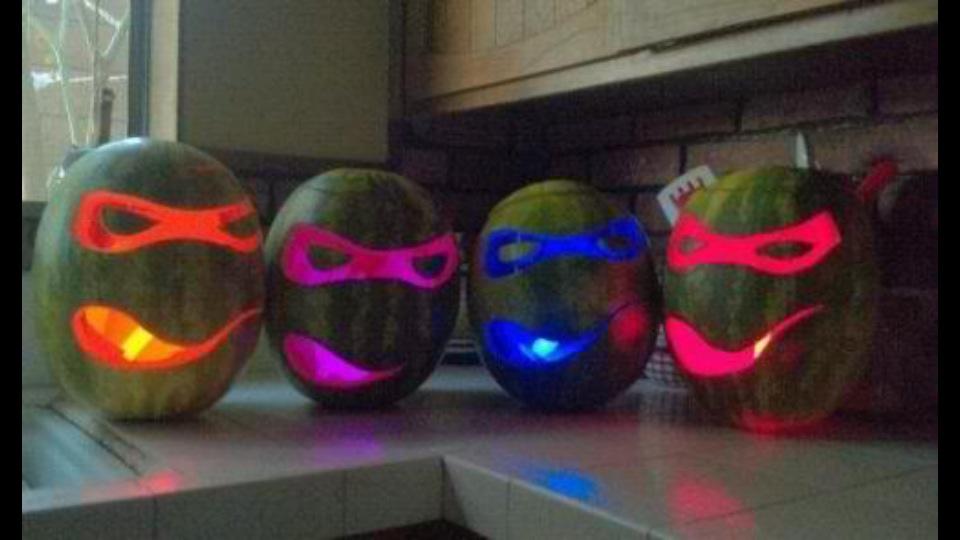 The fearsome foursome Jack-O-Lanterns were made with watermelons and the lighting  they are using are either colored lights or glow sticks. If you don’t know who these are, I suggest you go google Teenage Mutant Ninja Turtles and spend a few days with netflix and the internet watching everything you can. I love the TMNT so much, and Vanilla Ice’s Ninja Rap from Teenage Mutant Ninja Turtles II: The Secret of the Ooze

, which is superior to the first, in my opinion only because of Super Shredder and also I really like Vanilla Ice so make sure you follow him on Twitter for some very Ninja Tweets.

Interestingly enough, as I searched for information about Turtles 2, I found out that it is available for Pre-Order or Amazon.com for the 3 pack on Blu-Ray. The Blu-Ray set, which features all three amazing Teenage Mutant Ninja Turtle Movies, will be released on November 13, 2012 just in time for the winter holiday season and at only $17.32 it makes an excellent gift for anyone on your list.

And don’t forget to

to see more frighteningly awesome pins before they are posted here.